In every year during monsoon season the water level of the rivers Achavonkovil, Pamba and Manimala rises inordinately causing heavy flood in the low laying area of Kuttanad region. To safe guard the lives and properties of these in habitations in Kuttanad region, the excess flood water should be drained out to the sea through Thottapally spillway.

In August 2018, severe floods affected the state of Kerala, due to unusually high rainfall during the monsoon season. It was the worst flooding in Kerala in nearly a century. All 14 districts of the state were placed on red alert. According to the Kerala government, one-sixth of the total population of Kerala had been directly affected by the floods and related incidents. The Indian government had declared it a Level 3 Calamity, or "calamity of a severe nature. It is the worst flood in Kerala after the great flood of 99 that happened in 1924. Achenkovil River,Manimala,Pampa,Puthanar and Thalavadiyar   overflowed and flood water reached to the roof level of nearby inhabitants. Even though the Sand bar formed in the mouth of Thottapally spillway was opened (for a width of 200 metres) well before the flood, the Kuttanad regions were fully submerged leading to huge losses to the State.

The thottappally estuary is closed for most part of the year and needs to be opened before the onset of monsoon. The actual  design capacity of Thottappally spillway is 1800 Cubic meter per second but it gets reduced to 600 Cubic meter per second due to silt deposited at the bottom of the channel. The sand bar is opened well before the commencement of monsoon for the safegaurd of Kuttanad region.

This shortage of canal capacity decreases the efficiency of draining out the flood waters into the sea. Based on the observation that the mouth of the estuary need to open for a width of approaximately 320m with sufficient depth of channel to widen the estuary to ensure the smooth flow of water during the rainy season. The present work is removal of obstructions of approximately 500 metres towards downstream of Thottapally spillway channel near PozhyMouth. The removed sand is being transported to KMML unit at Chavara.

The quantity of sand deposited downstream of Thottapally spillway which can be removed was assessed to be around 249121.500cubic metres covering an area of 179700.00sqm. 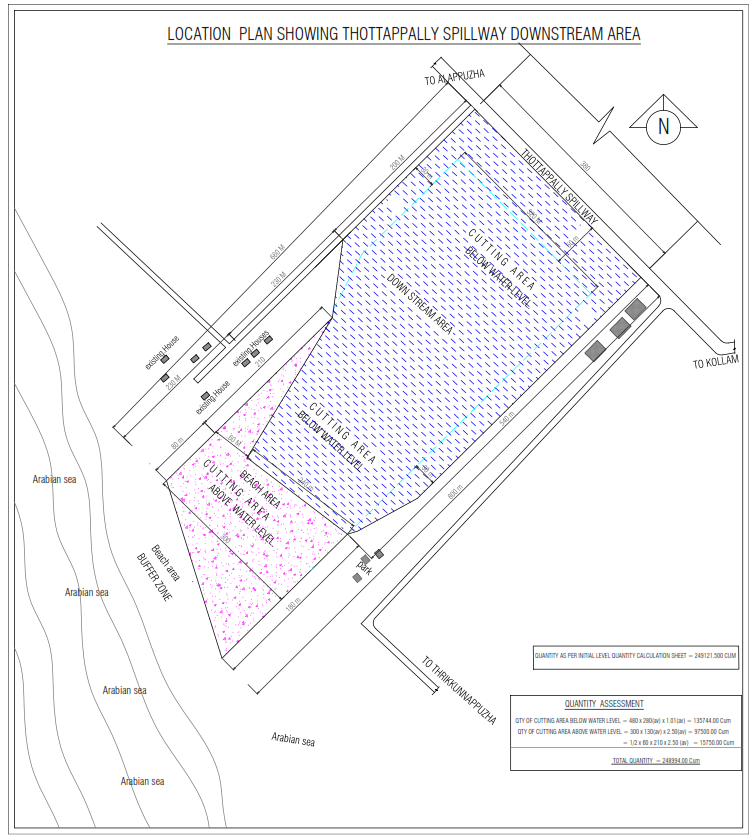